I read this by N.T. Wright the other day and I thought it was worthy of posting. I'm certainly in agreeance with it, and think I need to consider my own "blogging ethics" as a result... 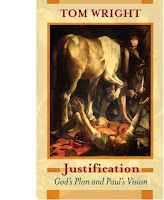 "It really is high time we developed a Christian ethic of blogging. Bad temper is bad temper even in the apparent privacy of your own hard drive, and harsh and unjust words, when released into the wild, rampage around and do real damage. And as for the practice of saying mean and untrue things while hiding behind a pseudonym - well, if I get a letter like that it goes straight in the bin. But the cyberspace equivalents of road-rage don't happen by accident. People who type vicious, angry, slanderous and inaccurate accusations do so because they feel their worldview to be under attack. Yes I do have a pastoral concern for such people... But sometimes worldviews have to be shaken. They may become idolatrous and self-serving. And I fear that that has happened, and continues to happen, even in well-regulated, shiny Christian contexts - including, of course, my own."
Tom Wright, Justification - God's Plan and Paul's Vision. (London: SPCK, 2009), 10-11.
I personally have been challenged by this quote and I think it's worthy of consideration in a lot of areas of our lives.
- September 02, 2009 1 comment: