How do we read the Bible?

Special Guest Post by Chick Yuill. This was posted by Chick recently on his Facebook page, and is reproduced here with his kind permission.

This year we celebrate the 400th Anniversary of the King James Bible. And this week two things have stimulated my thinking in relation to Scripture.
Men and Women
Firstly, I read an email from a young woman who has joined the Christian Union at her  university only to discover that a woman is not allowed to do the weekly talk. Neither is she allowed to stand for president of the CU because they believe she would not have 'the necessary authority'. I responded to this by describing it as 'gender bigotry masquerading under the cloak of biblical loyalty'.
Read more »
- March 29, 2011 No comments:

An eventful honeymoon... 11 Years On

It's been 10 years since the disastrous events of my honeymoon and in that time I've told this story plenty of times, but have never actually sat down to write it out. I thought that since it's now 10 years since my diagnosis I would take the time to write out what happened to my wife and me on what was supposed to be a celebration of our new marriage... 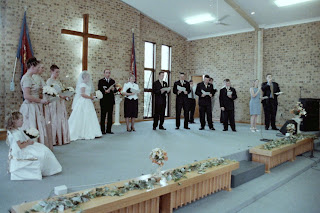 During some time I spent in England in 2010 I happened to come across a shop that sold old maps. It was a very small shop with lots to see throughout. Maps from all over the world, and of varying histories, were displayed on the walls, and others were available to pick up and hold and purchase. There were some incredibly detailed and very old drawings. My fascination with history was enthused and so I spent a good hour looking around.... then I discovered a small staircase leading upstairs. There was even more to see.

The upper room held different artifacts, though. Here there were clippings from old newspapers and books. Many of them were fascinating drawings of historical events, some cartoons, and others of a more serious nature.

Then I found it. An absolute gem of a picture that I knew I had to have.

Eternal Conscious Punishment - To Hell With It!

It was a relatively quiet night at work until I walked into a hearty discussion between two of my work friends. One, a sincere Christian, and the other, a sincere agnostic. My Christian friend was trying, somewhat in vain, to convince my agnostic friend about God's existence and the consequences of not living God's way. Then came the line that seems to be the sticking point - “I refuse to believe in a God who would torture you forever just because you don't believe in him”. My Christian friend tried the whole it's God's justice line but it seemed a deal breaker – she just wasn't going to buy it. But it got me thinking. Do I believe in a God who would torture someone for all eternity just because they choose by their own God-given free will not to believe in him? It had been something I had been wrestling with for a few years but my friend’s conversation bought it to a head – I needed to know what I believed and here are my conclusions.

Love wins? I hope so!

In the last 10 days or so there has been some significant discussions taking place in the bloggisphere and twitterverse, particular since Rob Bell's publishers released a tantalisingly worded preview of his upcoming book. The negative responses posted by those who immediately wanted to label Bell's theology as universalism (particularly John Piper and Justin Taylor) meant that "Rob Bell" began to trend in Twitter. The other reaction has been to the book itself. It hasn't even been released, but as at today it's number 13 on Amazon.com's Top 100 list. As one other author commented "I wish Justin Taylor had labelled me a universalist too".

This would have to be one of the most beautiful prayers I've ever read. I hope you agree. It is from Gregory of Nyssa's Life of St Macrina. Macrina was his older sister, and clearly from this hagiography (account of the life of a holy person) she was a woman whom he greatly respected. His other work On the Soul and Resurrection is portrayed as a dialogue between Gregory and his sister upon the death of their brother, Basil the Great (one of the other so-called "Cappadocian Fathers"). There it is Macrina consoling the younger brother, Gregory, through his grief.

Of course, this prayer is Gregory writing after the fact, and so it's likely to have been embellished somewhat, given his great respect for his sister, and that grief always colours our recollection of events (either for good or for bad). Still, it's a beautifully poetic piece of writing, laden with Biblical imagery and theological significance and yet it remains strikingly timeless.