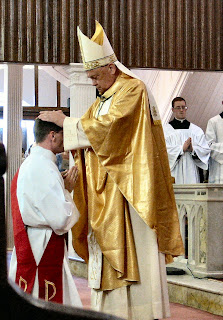 There's been a lot of discussion going on this week over at theRubicon on the place of ordination in The Salvation Army. Some very challenging and thoughtprovoking stuff... At the heart of the issue is (again? still?) is the question "Who are we?". As such, it's an ecclesiological problem. I'd like to focus my comments today on the recent changes in language that have occurred. Firstly, we need to recognise that the language of ordination was introduced into the commissioning of Salvation Army Officers in 1978 under the leadership of General Arnold Brown. General Brown was considered an expert in Public Relations, and so it's no surprise that generally it's considered the decision to introduce this language was for the purpose of ensuring Officers (particularly in the USA) were seen as ministers of religion like any other denomination. "We're just like them - we're ordained as well". It was a pragmatic and practical decision. I can live with that. We've often made many decisions in the past for largely pragmatic reasons, to keep us focussed on the mission at hand. Another case in point is the 1883 decision on the sacraments. The problems come when we try and theologise those decision after the fact. Less than 10 years ago, under the leadership of General John Gowans, the language of ordination was something similar to this... "Recognising that God has ordained you, I now commission you as an Officer in The Salvation Army". Compare that to the most recent directive from on high whereby Territorial Commanders are instructed to use language similar to this "Recognising that God has called you, I now ordain you as a minister of the gospel and commission you as an officer in The Salvation Army." There are two major changes here that are worth noting. Firstly, "who is doing the ordaining here?" Under the first version, it is clear that it is God who ordains. Under the second and current version, the General, or Territorial Commander in his/her stead, is the one who ordains. There is a major shift in language here of which I have a big problem with. It forces us to consider officership as those of a different priestly caste, and gives to those with the role of Territorial Commander the "right to ordain" (and presumably that right is not given to other positions). We also now need to consider issues surrounding apostolic succession... Do TC's now need some sort of "pre-ordination" ceremony of their own where they are given the blessing of the "right to ordain"? Sounds ridiculous??? Well, that's the path we're on. The second major change here is in regards to the timing of ordination. In the first version it is not suggested, but it is clearly a "past" event. I think it's safe to assume that that it was at conversion. As a result, this implies that all believers are, in fact, ordained. All persons who have faith in Jesus Christ, saved by the grace of God, are ordained for mission in the Church. This language, subtle as it may be, fits perfectly with The Salvation Army's understanding of the "priesthood of all believers". Under the second version, ordination takes place "now"; i.e. at that moment that the cadet is "ordianed and commissioned". This falls more in line with a Catholic understanding of ordination and, as such, this could be considered a kind of sacrament; a moment when grace is conferred on the recipient for the purpose of ordination. Now we're running into some major theological shifts here - of earthquake proportions. It's now just over 30 years since General Brown added the language of ordination (and at the same time excluded soldiers from the right to become General - another story). And it is now that we are truly experiencing difficulties in understanding that decision because we are so far removed from it. Every generation needs to "remake" these decisions for themselves as we all naturally ask the question "why do we do that?" Sadly, because there appears to be little or no theology to support the original decision (because it was pragmatic in nature) we're left floating in the breeze, chopping and changing that decision with every new General. For me, there are two solutions I would suggest. Drop the language of ordination all together. I realise this will cause some problems in locations were we need to be "seen to be like other ministers". The reality is - we're not! Stop trying to be like everyone else and let's be The Salvation Army! Secondly, I suggest that we need to drop the language of the "priesthood of all believers". What we actually need is to recapture an understanding of the "priesthood of Christ" (Hebrews 8). From that understanding we need to then recapture an understanding of every believers life "in Christ", out of which flows the "ministry of all believers". We are not priests in our own right - Christ is, and any believer who begins to understand themselves as a priest or minister apart from union with him is doomed for failure. It is only in and through Christ that we are are able to participate in God's ministry of reconciliation (2 Cor 5:16-21). Unless we have a strong understanding of the priestly ministry of Christ, then we should abandon any hope of understanding the "priesthood of believers". Let's not forget that.