The Priesthood of All Believers?

The theological concept of the “Priesthood of all believers” is one that is thrown around frequently. This statement suggests that those in full-time ministry, and in my denomination this means Officers, do not undergo an ontological change upon being ordained and commissioned. Rather their being commissioned as Officers (or ordained as ministers in other contexts) provides a framework for a new “role” within the church. The associated responsibilities of that role are therefore to be undertaken under the authority of the community of faith. The way one enters into that “role”, in The Salvation Army context, is through the Officer’s covenant – grace-based and enabled, and affirmed by the community of believers. However, there is a significant problem in our day and age. Luther is given most credit for the employment of this phrase, but we’re in an entirely different context to him. So can we still refer to the “priesthood of all believers” today in a way that is faithful to his meaning? I would like to suggest that we cannot. Here’s why.
Luther was in a setting which required him to go to the extreme polar opposite on many theological issues just to make his point heard. For example, within his doctrine of sanctification he speaks of “two kinds of righteousness” – the actual righteousness of the believer, and the “alien” righteousness of Christ. The word “alien” used by Luther here is deliberately extreme. The mediaeval theology that he was wrestling against suggested that it was possible for a person to somehow be “righteous enough” in order to be justified (classically known as works-righteousness). Luther’s point, based upon his reading of Romans in particular, is “No, you need a righteousness that is not your own”; i.e. an “alien” righteousness – the righteousness of Christ, and this is imputed (counted as theirs, but not actually theirs) to the believer through faith.

It’s a similar scenario here with regard to the “priesthood of all believers”. Luther takes a word that has been the sole possession of a select few within the Church (i.e. priesthood) and applies it to all believers. Whilst this is a theological statement it’s also very much a political one. In much the same way that the early Christian creed “Jesus is Lord!” (1 Cor 12:3) subtly, but strongly, implied that “Caesar is not”. Luther challenged the political and ecclesiological power structures of his day by the use of the phrase “priesthood of all believers”. It becomes very difficult when we then seek to directly reapply what was a very cleverly constructed theological statement, intertwined with some mediaeval politics, into our own day; particularly true given that the church now operates so separately from the state (in most Western settings). We live in a different scenario and hence we’re dealing with a different context and so the phrase “priesthood of all believers” is interpreted very differently now.
This particular concept demands a Christological and ecclesiological framework. The role of the priest in the Old Testament was an intermediary one with the particular task of offering sacrifices on behalf of the people. Within the priesthood there was a hierarchical structure related to those sacrifices that were more commonly performed, as well as those that were considered much more “holy” than others. For example, the sacrifices on the Day of Atonement were performed only by High Priest. Under him were other priests who performed other functions on other days. This hierarchical structure continued down even so far as itself being called a priestly nation – that is, it had an intermediary and sacrificial function on behalf of the rest of the world. Furthermore, the concept of “priesthood” also implies the presence of a “sacrifice”.
In the New Testament the writer to the Hebrews reinterprets priesthood within a Christological framework. This hierarchical structure of priests has now found its eternal fulfilment in Christ. He is both the High Priest and the sacrifice itself and is perfectly able to eternally fulfil both roles within himself. He, as High Priest, sacrifices himself to God for sin on behalf of the world. It’s not that the old sacrificial system is done away with as a kind of “God’s first try and now we have Christ” effort. Rather, Christ is the High Priest offering sacrifices (i.e. himself) on behalf of all people perfectly fulfilling the functions of both the Priest and the sacrifice itself. Crucial to understanding the priestly function of Christ is Hebrews 7:26-28:
For it was fitting that we should have such a high priest, holy, blameless, undefiled, separated from sinners, and exalted above the heavens. Unlike the other high priests, he has no need to offer sacrifices day after day, first for his own sins, and then for those of the people; this he did once for all when he offered himself. For the law appoints as high priests those who are subject to weakness, but the word of the oath, which came later than the law, appoints a Son who has been made perfect for ever.
The ecclesiological framework of this doctrine comes from the other New Testament references to “priests” or “priesthood” (excluding those references in the Gospels and Acts referring to actual priests). There are six other references that are pertinent to this discussion (Romans 15:16; 1 Peter 2:5, 9; Revelation 1:6, 5:10, 20:6). All of these references, with the exception of Romans 15:16[1], speak of believers as priests in the “corporate” sense and not in the “individual”. For example, 1 Peter 2:9 the word for “you” in the Greek is the plural humeis.
Of crucial importance to this is the way that the Christological and ecclesiological frameworks interrelate. The priesthood of believers is “made by God”, and is only and always “in”, “with”, or “through” Christ. The connection between the priesthood of the Church and the priesthood of Christ is made explicit in each of these references and must be emphasised whenever the “priesthood of all believers” is discussed. Sadly, this is not always the case and this is where modern interpretations of the phrase often fall down. 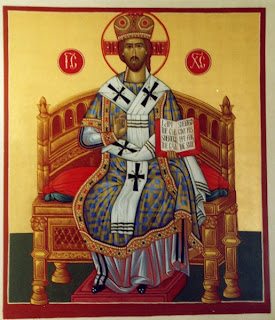 Given the New Testament’s emphasis upon the High Priesthood of Christ, and the church as “priests in Christ” I refute any suggestion that we don’t need an intermediary to approach God, or that somehow each believer has become his or her own priest. This is clearly contrary to the passage above from Hebrews which emphasises the continued need of Christ as intermediary and it also places an individualistic interpretation upon “priesthood” which is not present in the New Testament texts. If each believer has become their own priest who are they an intermediary for and how is this possible without Christ?
Part of the problem we face with the “priesthood of all believers” is the diverse definitions applied to two key words within this phrase; namely “priesthood”, and “all”. “Priesthood” has come to be interpreted as “ministry” and “all” has been interpreted as “each and every individual”. This has led to the problem identified recently in an article by General Shaw Clifton;  the priesthood of all believers has become a “slogan for diminishing the role of a separate order of clergy or of officers, thinking mistakenly that the phrase is a battle cry which means: ‘anyone can do anything within the church!’”[2]
As a result of this, I suggest that the phrase should actually be abandoned not reapplied in our own context. In its place I suggest it is appropriate to refer to the “Ministry of the Church through the High Priesthood of Christ”. It does pain me to abandon the term “priesthood” in reference to the Church, but this is a deliberate move given the misinterpretation of this term that exists. Sometimes the theological pendulum swings too far and with a shift or loss of meaning it’s necessary to drop a term in order to communicate truth in a more meaningful way. In regards to “priesthood” the Western value of “individualism” so overshadowed this Biblical term that it has created the problems identified above.
This new term I’ve suggested attempts to highlights that which is emphasised by the writer of Hebrews; namely, the sole High Priesthood of Christ and the eternal need of his intermediary and sacrificial activity on behalf of the world. It secondly stresses the corporate ministry of the church as an extension of the eternal priestly ministry of Christ to and for the world. It intertwines the ecclesiological and Christological frameworks together. At the same time the place for a “role” within the church as Officer or Minister is in no way devalued, but rather it is affirmed within this broader Christological and ecclesiological framework.