This is a kind of postscript to my recent series on Salvation Army Sacramental Theology (which starts here). I want to provide a selection of quotes about Christ's words of institution - "Do this in remembrance of me" (1 Cor 11:24). These are taken from a particular commentary (which will be revealed shortly) because I find them… well… ironic. Not because of what they say, but simply because of where they have been printed. More on that in a moment. For, now, here are the quotes...

“In remembrance of Me.” Some might say, ‘We need no memorial of the Redeemer’s sacrifice; it is graven on our hearts as on the rocks, for ever.’ The Son of Man knew our nature far too well to trust to such a pledge, even if it could have been given. He knew that the remembrance of it would fade without perpetual repetition, and without an appeal to the senses; therefore by touch, by taste, by sight, we are reminded in the Sacrament that Christianity is not a thing of mere feeling, but a real historical actuality. It sets forth Jesus Christ evidently crucified among us. Let us draw something practical from this. Memory depends on two things—on repetition, and on the impression being a sensible one, that is, one of which the senses take cognisance. Does any man wish to forget God? Does any man wish to live in sin without being disturbed by the painful thought of judgment? We can tell him how he may ensure that—for a time at least. Let him attempt to be wise than his Maker: let him say, I can read my Bible at home, and worship God in the open beauties of nature, as well as in a church; let him give up private prayer, and never attend the Lord’s table, giving up all that is symbolical in religion. Let him do this, and we will ensure him most terrible success; for so judgment to come will be to him only a hypothesis, and God’s own existence merely a perhaps.”

If Meyer be right in supposing that the word here used is never employed except in the sense of oral proclamation…, we have here strong grounds for affirming that the words of institution formed part of the form of celebrating the Sacrament, even in apostolic times… since this Sacrament was instituted as a memorial of Christ’s death upon the cross… as long as the Christian Church shall last, this Sacrament will continue to be celebrated for the object for which it was instituted. However widely divided on other points, Christians have agreed in carrying out this prediction for more than eighteen hundred years.

S. Paul regarded the Lord’s Supper as a rite to be often celebrated, and that in all future time, until the Lord himself should come to judge the world. The perpetual obligation of this ordinance cannot, therefore, be reasonably disputed. 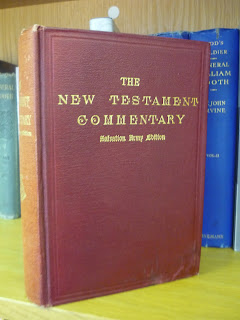 These quotes are taken directly from The New Testament Commentary – Salvation Army Edition (: Salvationist Publishing and Supplies, n.d.)
I find it so fascinating that we printed (or more than likely badged and reprinted) a commentary under the name of The Salvation Army, with a foreword by General William Booth, no less, and actually retained these quotes which quite clearly and quite bluntly contradict out position in regards to the Eucharist.
It’s something that is more than mildly amusing to me.
But that might just be me.
- July 25, 2011