I Did Not Vote No! - Guest Post from Tim Gittins

I don’t know about you but I can’t help but notice all of the Facebook polls that are popping up recently telling me that someone voted "Yes" for something or "No" for something or voted for their favourite TV Character,… it seems that an endless number of polls are being created everyday on Facebook.

I want to confess to something – not to purge my soul – but to share a thought:

I did not vote “No” in the “Should Same Sex Marriage be allowed” survey.

In fact I have not signed any petition on the issue. I have not written to my MP or participated in any protests and every time I get an email in my inbox from the A.C.L (Australian Christian Lobby) and the word marriage is in the subject line – I delete it without opening.

Am I saying that I am in support of same-sex marriage – no I’m not stating that – in fact I’m not stating my position on that issue at all – because I actually don’t think that is the big issue.

So what is the big issue??

Patience, patience I will get to the big issue – but not yet.

Every time I see a “Christian” vote no on a Facebook poll, or engage in a protest or speak publicly against same-sex marriage, or write or sign a petition; what I see is a stone – perhaps a rock - in the hand of a committed, faithful, well-meaning person trying to do the right thing for the Kingdom of God.  Sadly, what I haven’t seen a lot of is I haven’t seen too many Jesus types quietly doodling in the dirt.  At this risk of being accused of having some type of misguided ‘Messiah complex’ I am putting these thoughts to writing in an attempt to perhaps do some dirt doodling of my own.

If you are not familiar with my veiled references to the Bible story you can read about it in John 8:1-11.  The essence of the story is that religious people were confronting Jesus on an issue of ‘Law,’ of ‘Morality,’ and of ‘what is right’.  You will also know that at no point did Jesus question the legitimacy of the ‘law/morality/rightness’ to which they referred, but rather, in the way that probably only He can, he pointed them to a person, an individual, a soul. One who has feelings, hopes, dreams, desires, conscience, heartache, tears, joy (I could be here all day – but I think you get the point).  Jesus reminded them that at its core, the essence, the motive, the reason for their law was in fact people; persons; human beings – in relationship with God and with one another.  It was at another time when he famously summarized all of God’s intentions for people in that famous phrase “Love the Lord Your God with all you are and love other persons as deeply and personally as you love yourself” (Paraphrase mine). The astute Bible readers will now, I’m sure, want to direct me to Jesus parting words to the woman from John chapter 8 and remind me that he then said to her “Go and sin no more”.  This is true, and I am not intelligent enough, nor do I possess the historical or theological understanding to discuss those words on an incredibly deep level; rather I will simply point out the timing of Jesus words.

He didn’t make that statement as soon as she and her accusers arrived on the scene.  He didn’t say to the accusers – ‘Look, you’ve made your point, you’ve scared her sufficiently, if I tell her to straighten up her act and behave properly; if I tell her to just stop sinning I’m sure that’ll do the trick’.  He certainly didn’t invite them to sign a petition telling her to stop sinning, he didn’t organise a protest in favour of their law/customs/moral standards and he didn’t ask them to get on a public rock-wall (or whatever they used before Facebook) and vote for her to change her ways.  I can’t help but wonder if the reason Jesus didn’t do that is because he knew it wouldn’t work.

Admittedly we are not actually told whether or not Jesus words to her actually held any sway, and whether or not she amended her behaviour (in other words ‘did it work?’).  What we do see, though, is that Jesus demonstrates to her her value as a person. He shows her acceptance, love, patience, and understanding. He shows her kindness and dare I say forgiveness BEFORE he makes any comment whatsoever on her behaviour, and I suspect (may I be so bold at to suggest that in fact I know) that if Jesus had come across her again, and she had not changed her behaviour he would have shown her the same acceptance, love, patience, understanding, kindness and probably even forgiveness BEFORE he did anything else. Then (and only then), with love and understanding, might He have spoken (with compassion, mercy and acceptance) to that part of her that was taking her further from God and from helpful, supportive, spiritual community.

I don’t know if I’m making sense, I don’t know if you are following me and joining the dots – but the reason I haven’t participated in the reaction to proposals about same sex marriage is because I have people in my life who I love and care for who experience same sex attraction.  Persons, individuals, souls, ones with feelings, hopes, dreams, desires, conscience, heartache, tears, joy – and I actually don’t want to pick up stones and throw them at these people – because I think that’s only going to hurt them and push them away – and I love them too much to do that.  What I want to do is build relationship with them, to know them, to show them acceptance (as Jesus did), love, patience, understanding, kindness.  And then (and only then), with love and understanding, I might be given the opportunity (with compassion, mercy and acceptance) to speak to that part of them that may be taking them further from God and from helpful, supportive, spiritual community.

It’s easy to click “No” on Facebook, to sign a petition, to write to an MP, even to be involved in or organise a protest.  It takes a lot more time, a lot more effort, a lot more heartache, a lot more pain and most certainly a LOT more risk to build relationship. 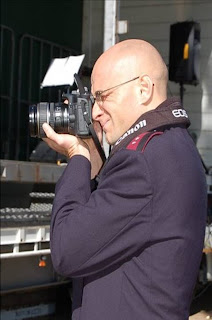 About Tim Gittins...
Tim was born in Toowoomba, Qld, in 1975. When he finished high school he entered the Salvation Army's School for Youth Leadership in 1993. Upon completion, he started work as a community youth worker in Bega, on the south coast of New South Wales. Following this he moved to Bonnells Bay Corps in 1994 as the Corps Youth Leader. Tim married Laura in 1997 and in 1998 they left Bonnells Bay Corps to train to become a Salvation Army Officers.   Together they took up their first appointment at Bathurst Corps. They spent nine years at Bathurst before being appointed to Canberra City Oasis Corps. At the start of 2011 they took up another appointment as Corps Officers at Bonnells Bay Corps. Tim and Laura have four children, Joshua (10), Abigail (8), Samuel (6) and Bethany (4).
- October 05, 2011