“Without Christian worship, there would be no Bible. The Bible is the product of the early church’s common prayer. The earliest Christian communities circulated among themselves and read in common worship stories of the life and ministry of Jesus and the early apostles. They wanted to hear these stories and respond to them.”[1]

This quote gets straight to the heart of an important matter with regard to Christian worship – the place of Scripture within worship. The point is well made. The texts that make up the Scriptures have a history behind them. Each of the ‘books’ that make up the Bible was considered sacred because through them God spoke to his people. It may come as a surprise to some but the Bible did not, as N.T. Wright has so eloquently put it, fall “from the sky in King James Authorised Version, bound in black leather and complete with maps”.[2] That’s a much later development. In reality, these texts were written for a specific audience to be read out loud and heard. As such, many of them (such as James, Hebrews, and 1 John) can be considered some of our earliest Christian sermons. They

“were intended to be rhetorical discourses delivered orally to congregations during worship, which explains why so many of these documents begin with a prayer… and end with a benediction or doxology”[3].


But the advantage these sermons had was in the fact that they were written down. The community that first heard them, also shared them; either sending it on, or having it copied. Don’t forget, also, that these communities were more ‘orally’ based than us ‘texted’ based communities of the 21st Century. As a result, the ‘sharing’ took place verbally as well as in writing. This was a first century version of a Facebook post, or a “Tweet” with the copying and sharing of these texts quickly going ‘viral’.

…and Christians “liked” them.

That’s why they quickly became ‘sacred’. Our Christian forebears found this selection of texts to be the most edifying, the most significant texts (because of their apostolic authorship), and important ‘means of grace’ – that is, means by which God spoke to his people and gave them an opportunity to respond. This all took place within the context of Christian worship. The people of God gathered together around the Word of God in order to hear from God and to be given the opportunity to respond to God and to do so together. Remembering also that for the most part of the first 300 years of Christian history these gatherings took place under threat of persecution. Yet, the people gathered, the Word was preached, and the good news of Jesus Christ was proclaimed.
We have the Bible today (bound in leather and complete with maps) because of Christian worship. My fear, however, is that because of Christian worship we may not have the Bible in the future.

Quite often only a few verses of Scripture are read in corporate worship. Most often those verses are taken from the preachers favourite selection, and only serve as a springboard from which they dive into the sermon; not, as it should be, the pool out of which the sermon is drawn. Many congregations are suffering from Scriptural starvation. They simply are not getting enough. The worst case of this I ever experienced was when the preacher spoke on Nehemiah 8 encouraging the congregation to be “people of the Book”. The scandal of that sermon was that nowhere in the meeting was “the Book” opened at all. Nothing. Not a verse.

The memory of that occasion burns brightly in my mind even today for all the wrong reasons.

My challenge to worship leaders and preachers is this – how much time is spent reading from the Word during worship? Is the Bible a convenient source of sermon illustrations, or are you “reading from the Book of the Law of God, making it clear and giving the meaning so that the people understand what is being read” (Neh 8:8, adapted.)? Is Sunday about the people of God gathering together around the Word of God in order to hear from God and to be given the opportunity to respond to God and to do so together, or is it something else? A holy huddle or a Jesus cheer squad? 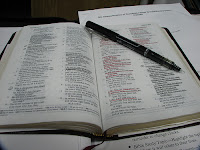 As I’ve said many times before, God has spoken through his Word for thousands of years and I believe he wants to continue to do so now. So please, open the Word, read the Word, preach the Word, feed the people on the Word, give them an opportunity to respond to the Word, and encourage them, like the first Christians so eagerly did, to share the Word with others. In doing so the Bible will continue to be one of the central means of grace for the people of God for years to come.