"How foolish you are!"

This year I have been leading a Bible study at our church on Luke’s gospel. We’ve been slowly reading through the twenty-four chapters of this gospel and seeking to listen to God’s voice throughout this process. It’s been really beneficial to take our time and not rush the process through. As a long distance runner I know the benefit of the “long slow run” in my training. There’s also great benefit in a “long slow read” of Scripture as well.

It was particularly exciting and challenging to come to the climax of the narrative – the crucifixion, death, burial and resurrection of Jesus. Throughout the gospel we observed Luke’s particular emphasis on those who are on the fringe of society, Jesus’ fixated “journey to Jerusalem” (from 9:51 onwards), and the tension that builds between Jesus and the religious leaders of his time. None of that was particularly new to me, but the benefit of reading and absorbing this once again has not been futile. What has stood out, though, as we read through chapters 23 and 24 in particular, was the way Luke places women in a prominent position within the narrative; crucially at the point of the passion itself.


Whenever an author repeats a phrase, or seems to emphasise what we might take as a moot point, it’s worth asking “why would they do that?” With Luke, the constant reference to “the women” (23:27-31; 23:49; 23:55; 24:1-12; 24:22) is deliberate and sets up the narrative for how he will choose to authenticate the resurrection. It is the women who are the eyewitnesses to all of the events surrounding Jesus’ crucifixion, death, burial and resurrection. They are the first evangelists. They are the first to testify that the tomb was empty and that Jesus was alive.

This is highly significant.

Luke begins to set the scene when Jesus is led away from Jerusalem to the place where he is crucified. The women join others who follow him out to that place (23:27). Significantly, of the limited things that Jesus says from the moment of his arrest until his death, it is the women whom he directs his longest and most compassionate response. Indeed, they are the only longstanding followers of Jesus that he speaks to after Gethsemane. I say “longstanding” to allow for the prisoner on the cross next to him (23:43).

Next the women witness the death of Jesus. Unlike the others, they do not “beat their breasts” (a sign of grief) but rather stand “at a distance, watching these things” (23:49). The choice of language is important. For Luke, this language establishes them as eyewitnesses of this event and so it is critical that they “watch” Jesus die. They see it happen. They will testify to this later.

Following the death of Jesus comes the burial. At this point the women who had come with Jesus from Galilee followed Joseph and saw the tomb and how his body was laid in it. Then they went home and prepared spices and perfumes, probably because by this time of day the sun was setting meaning that the Sabbath was commencing. They rest on the Sabbath in obedience to the commandment (23:55-56). 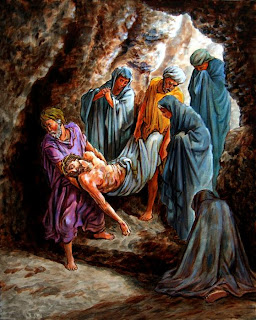 Again, the language of “seeing” the tomb and where Jesus was laid is critical. Luke is setting the stage for the women to be the eyewitnesses to the passion. Whilst the faithful men involved change at each given point (Simon of Cyrene, the Centurion, Joseph of Arimathea, even the other prisoner), it is the women who are the consistent thread linking every aspect of the story. Furthermore, their obedience is emphasised in verse 56. They are not rebellious resistance fighters whose testimony could subsequently be called into question. These are faithful Jewish women watching, observing and obeying the commandments.

Immediately after the account of the burial the women shift from spectators to lead characters in the narrative. We follow them as they travel together to the tomb in order to complete the task they were unable to finish due to the Sabbath regulations. They find the stone rolled away, enter the tomb and see the place where they had previously witnessed Joseph laying the body. This time, though, the tomb is empty. “While they were wondering” (24:4) two angels appear before them and say to them that Jesus is not here, for he is risen. They call upon them to “remember” what he had told them in Galilee. When the angels remind the women of Jesus words they do indeed “remember” them. Whilst it would be nice to include some reference as to whether or not they “believed” at this point we are not given the luxury of this information. Given, however, that Luke makes a particular emphasis on the male disciples’ unbelief at hearing this same news we might assume that the women’s reaction was more positive and immediate. Luke explicitly states, of the male disciples, that “they did not believe the women, because their words seemed to them like nonsense” (24:11). The women, though, did indeed believe the words of the angels and also those of Jesus that they “remembered.” He had indeed been raised from the dead as he told them so previously.

We then shift location briefly, however this is a continuation of the narrative, not a new story. Cleopas and his companion travel on the road out of Jerusalem on their way to Emmaus. Unknowingly Jesus appears next to them and they speak with him on the way. They confess that the women “amazed” them. This same word is used by Luke in 8:56 to describe the reaction of the parents when Jesus raised their dead daughter to life. This is more than just the “wow factor”. It includes elements of confusion and even what we might describe as being “out of their minds”. Jesus responds to them with an admonition; “How foolish you are, and how slow to believe all that the prophets have spoken!” (24:25).

Isolating this response from Jesus and disconnecting it from the broader context of the whole passion narrative may suggest that Jesus spoke these words because the disciples were slow to believe the message. There may indeed be an element of this in there, however, given Luke’s careful and deliberate attempts to incorporate “the women” as the first eyewitnesses I would also suggest that this is also an admonition because they were slow to believe the messengers – that is, “the women”.

Could it be that the prophets they were slow to believe were not only the “prophets” of old but also the “prophets” in their midst – the women? Could Luke be implicitly suggesting that these women are the first to fulfil the prophesy of Joel 2:28 that he would explicitly reference later in Acts 2:17 – “your sons and daughters will prophesy”?
In the light of this broader context I would suggest that this is indeed what is going on here. Jesus admonishes these male disciples not only because they failed to believe the message, but more specifically because they failed to believe the message because the messengers were women – Mary Magdalene, Joanna, Mary the mother of James and the others with them (24:10).

There seems to me to be a parallel in the present day church particularly with regard to those specific parts of the church that wish to silence the voice of women. Whilst they would rely on particular interpretations of Pauline passages to affirm their stance it seems to me that the resurrection narratives need to be considered here. In all four gospels it is women (or a woman in the case of John’s gospel) who are the first evangelists. They are the first to share the message that “He is risen”. Indeed in all three Synoptic Gospels (Matthew, Mark, and Luke) they are instructed to do so. This is highly significant. Female voices were the first to proclaim the message “Jesus is alive!”. It seems ridiculous to me to suggest that this message should not continue to be proclaimed in every setting possible by women as well as men.

To those who would wish to silence the voice of women in the church it seems appropriate to apply Jesus’ admonition – “How foolish you are!”
- November 20, 2013