September 23, 2016
The Salvation Army in Australia is in the midst of an historic journey. Since 1880 the Army has been active in this country, doing all it can to see God’s Kingdom come and his will be done here on earth as it is in heaven. For much of that time, for functional and practical reasons, there have been two territories; Australia Southern and Australia Eastern. Earlier this year it was announced that this would change. The two would become one. As at 1 June the Australia One project was launched and work was begun on joining the two territories together into one unified structure.

This move excites me. Not just for the practical reasons, but for theological ones as well. This has the potential to be a symbol of unity to the rest of the Army and, indeed, the world. A symbol of how two different things can come together to form something new and, through that new thing, reform society. This can be a symbol of the incarnation; that moment in time and space when the divine and human were united in an eternal bond and through that union, in the very person of Jesus Christ, new creation was birthed. Not just replacing the old creation but born there in the midst of it, and it has been growing and building towards its ultimate conclusion ever since. That moment to come when all of the old shall become new and everything will be recreated and live under the lordship of Jesus Christ. Seen in that light the Australia One project is very exciting.

On the 17th September General Andre Cox and Commissioner Silvia Cox were guests at a special meeting that took place in Adelaide to install Commissioners Floyd and Tracey Tidd into their leadership roles for the new, unified Australian territory. I enjoyed watching the meeting online, as did many other people I’m sure. Commissioner Floyd Tidd, in his message, captured the thoughts above very succinctly when he said:

Just prior to the meeting there was “March of Witness.” The march was led by the General and the Commissioners, with the Melbourne Staff Band and Sydney Staff Songsters following along. In the age of social media photos and videos of this were quickly shared online.

Here’s where things got weird.

Comments began to be made about women not wearing hats. This was quickly, and hilariously, mocked by others who saw the absolute stupidity of such comments. I’m not going to comment further on #hatgate here. But then other comments were made and largely ignored. Comments that applauded seeing the Army marching on the streets again. Others lamented the fact that it’s not done as much as it used to be.

This concerned me more than the hats.

In the background of the videos and photos online the vast majority of the people observing this march were other Salvationists. Most of them were taking photos or videos, presumably to retain the memory and share it with friends. This is all well and good but then we couple this with the fact that promotions for the meetings included warnings that seating was limited and so people were actively discouraged from attending in person. Online participation was the preferred option.

Now I concede that these observations are made from afar. I was not there and I didn’t see more of the march than what was published online. Here’s my concern, though. This was labelled a “March of Witness.” This isn’t a new name. In fact, it’s one we’ve used for years but I have to ask, “what are we witnessing?” and “to whom are we witnessing?” With no one watching other than ourselves and no room for anyone else who might have seen this spectacle and wanted to find out more, what was the point of this march? In the past the March of Witness was a deliberate spectacle that drew a crowd so that you could present the gospel to them. Where was the crowd here? And if, in fact, they did come what would it say to them to have them if they were turned away at the door?

Furthermore, the comments on social media reveal that there is still a nostalgic longing for the days of the past. People remember the days when the sight and sound of The Salvation Army Band marching down the street was common place and long for the return of that method. The problem is, of course, that this method has become increasingly difficult to undertake by virtue of the decreasing number of bands, their respective sizes and the age and physical ability of their aging members. That stark reality, though, is ignored when you view the past with rose coloured glasses. Nostalgia can warm the heart. It can also blind us to the present.

Now I want you to review that event, even if only in your mind. Take off the nostalgia glasses and view this event in terms of its effectiveness. Did it work? Did it achieve the purposes for which we set out for from the beginning? For whatever purpose the March of Witness was conducted without greater evidence of its effectiveness it has to be labelled as an exercise in self-deception. It was not witness. It was propaganda. It was telling ourselves, not others, that we’re still marching… to our own meeting… that others can’t fit into.

Now that’s a harsh reality to face, so just take a moment to consider it. Disagree if you want to but do try and reflect seriously and maturely about what we do and why it is that we do it. Our mission is to preach the gospel of Jesus Christ and meet human need in his name without discrimination. If it’s not doing that then stop it and do something that is. It is, and has to be, that brutal.

I want to propose an alternative “march of witness.” One that, I think, would begin to demonstrate the “newness” of the way forward. Instead of marching people in, march them out. Line the band up (somehow) at the exits to the hall, get them to play a march and send everyone present out into the world to be The Salvation Army in their community. Prior to that, equip them with a simple resource (a “tract wrapped up in a sandwich”) that they can use wherever they go. Something that will be simple and effective and enable them to connect with people in their world. If it doesn’t work, try something else. 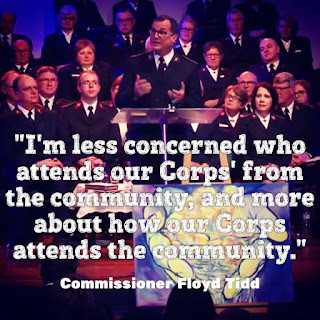 Again, in his message, Commissioner Tidd said the following. “I’m less concerned with who attends our Corps from the community and more about how our Corps attends the community.” If that’s true, and I think it is, then a march of witness that focussed on getting our actual people out of their seats and into the world would fair better than one that is focussed on getting hypothetical people out of the world and into our seats.

It would be messy. It would be challenging. It would be difficult. It might mean we’d have to skip afternoon tea. But it would remind us of what it is we’re meant to be – a mobilised Army of Christians committed to the belief that all of us have a role to play in God’s mission, not just the band, and each of us is responsible for the part we have to play in our part of the world.

As far as I’m concerned the problem with most Salvation Army uniforms is not the lack of hats, it’s the lack of dirt. Phil Wall once suggested that at some point in our history we marched off the battle field and onto the parade ground. It’s time to march back out there.
Mission The Salvation Army Worship

I start with a few cautions for us to consider.
The "Prophetic" calling of The Salvation Army - Of late there has been a particular emphasis on our "Testimonial" role on the possibility of a Christian life lived "without sacramental ritual". The big questions for any prophet are (a) are you really saying what God wants you to say, and is that supported by Scripture, and (b) what evidence do you have to support such claims. In response to (a) there is probably more support for an observant position than a non-observant one, and for (b) there have not been any other denominations adopt a stance. Sure, they respect us and admire us, but no one's joining us. Our prophetic role is either ineffectual, or needs closer scrutiny.Who's decision was this? James Pedlar has closely compared Sa…
Read more