Running away from.... grace?

Anyone who spent any amount of time anywhere near a Sunday School has heard the story of Jonah. For whatever reason it’s seems to be 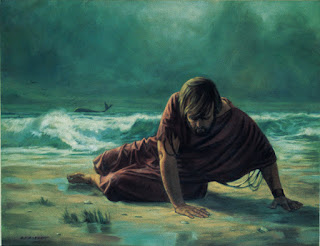 a very popular story to share with children. I suspect anything to do with animals saving the day is attractive to kids. I’m sure you know it well. Jonah gets told by God to go to Nineveh and “preach against it” (1:2), he runs away, ends up on a boat in a storm going in the opposite direction, he gets thrown in the ocean which seems to appease God, he’s swallowed by a “huge fish” (1:17) in which he spends three days and three nights. From inside the fish he realises the errors of his ways, prays to God and determines to obey instead, so the fish vomits him up onto dry land. Jonah goes to Nineveh and proclaims the message God gives to him; “Forty more days and Ninevah will be overthrown” (3:4). Immediately a remarkable thing happens – “The Ninevites believed God” (3:5). The king calls a fast and demands the people and animals be covered in sackcloth to demonstrate their repentance and decrees that everyone should

“call urgently on God. Let them give up their evil ways and their violence. Who knows? God may yet relent and with compassion turn from his fierce anger so that we will not perish.” (3:8-9)


Perhaps even more amazing, which especially challenges the notion that God doesn’t change, God “relented” and “did not bring on them the destruction he had threatened” (3:10). The NRSV even translates this verse as “God changed his mind.”

Whilst this theological nugget is one that I’m very interested in today I want to consider the reason why Jonah ran away in the first place. From the time I was sitting in a Sunday School lesson hearing about this story I’ve always been given the impression that Jonah ran away because he was afraid of the Ninevites. There’s probably a good case to be made for this interpretation. I’ve heard it suggested that the Ninevites were the ISIL of their day. If that’s true then I’m pretty sure I’d be dead scared if God asked me to go into Syria and preach against them today. Jonah could be forgiven for being afraid. But is that the reason why he runs?

Any good interpretation of Scripture needs to deal with the text as we have it and there is no reference to Jonah’s fear. Sure his prayer refers to his distress (2:1), but he’d just been thrown into the sea in the middle of a storm and subsequently swallowed by a large fish. I’m pretty sure my blood pressure would have risen a few points at that as well. This distress isn't connected to the Nineties at all.

There’s nothing at the beginning of the story that suggests that it was fear of the Ninevites that sent Jonah in the other direction. However, after the Ninevites have repented it is a different story. Jonah tells us “why [he] fled to Tarshish at the beginning” (4:2, NRSV).  Here it is, and here he's speaking to God:

“I knew that you are a gracious God, slow to anger and abounding in love, a God who relents from sending calamity.” (4:2)

This isn’t the only place in Scripture where this description of God is found. In fact, it’s pretty much everywhere (e.g. Exodus 34:6, Nehemiah 9:17, Psalm 86:15, et al). Jonah would have grown up with this being the bedrock of his belief system since he was in “Sabbath School.”

And he believed it.

That’s why he ran away.

The message he had to deliver was a message of doom for his enemies. These were a people that had terrorised his friends and family and he was given the responsibility of going to them to say that God was going to wipe them out. Once delivered he only had to wait forty days and he could enjoy the fireworks! To quote a current US Presidential Candidate Jonah’s message was that God was going to “Bomb the **** out of them!”

There was a problem, though.

Jonah knew what God was like. Gracious. Compassionate. Slow to anger. Abounding in love. He knew if he went to the Ninevites with a prophecy of doom about this God, and they repented, then he would act graciously, compassionately, without anger and in an abundance of love.

Human instinct is to hate those who persecute us. To despise them and to desire the worst for them. This desire is evident in the notoriously challenging Psalm 137. Written on the shores of a river in Babylon where the people of Israel were sitting in exile; away from their land, their temple and their people. Taunted by their captures to sing a song of the Lord but how could they when they were so evidently far from the Lord’s favour. The anger of the psalmist boils and he writes his own beatitude, one that didn’t quite make it into Jesus’ sermon on the mount (nor Boney M’s song for that matter).

“Happy is the one who seizes your infants and dashes them against the rocks.” (Psalm 137:9)

We can relate to Jonah’s anger. There are some who can even relate to the psalmist’s cries for retribution against their captor’s children. Perhaps that’s why Donald Trump’s calls to “go for their families” (in reference to ISIL) has scarily gained traction in some quarters.

The response of Christ and his call to his followers is vastly different though. His call is to “Love your enemies and pray for those who persecute you” (Matthew 5:44). Not just pray for them that God would smite them. Pray that they would, indeed, repent. Pray believing that the one we pray to is gracious, compassionate, slow to anger and abounding in love. Pray believing that if they repent that they will be forgiven and restored just like you and I have been.

There is a well-known hymn of the church that includes the line “The vilest offender who truly believes, that moment from Jesus a pardon receives.” I’ve sung that so many times I couldn’t count it.

Do we believe it?

We have a choice to make. We can choose to go along with the ones who say “bomb the *** out of them.” Or we can be obedient to the one who doesn't just says “love your enemies and pray for those who persecute you;” he demonstrates what that looks like. It isn’t easy by any stretch of the imagination but we are called to “Be perfect, therefore, as your heavenly Father is perfect.” (Matthew 5:48).

Be slow to anger.